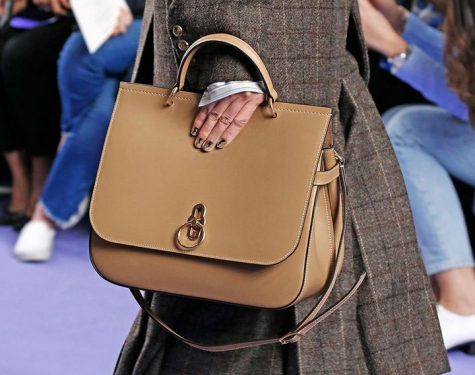 When consumer perception of a high-end brand goes severely off course, righting the ship is a long, expensive process that takes both luck and little bit alchemy to succeed. Mulberry is in in the midst of one such rebuilding operation right now, and in the Mulberry Fall 2017 runway show a couple days ago in London, creative director Johnny Coca expanded his vision of what Mulberry will become by looking to Britain’s aesthetic past.

Before arriving at Mulberry, Coca was Céline’s head of accessories, which you can see in some of his designs for the brand. When you mix that with an English heritage sense of traditionalism, some of the pieces take on a classic quality that’s almost Hermès reminiscent–but at a lower price point, of course. If you’re looking for a tailored, smart work bag that’s neither too edgy nor too formal, this collection will provide some options. There are some more out-there choices in the line, including several staid bag shapes embellished with elaborate crystal fines or mother of pearl images of facial features. (Just, like, look below. You’ll see what I mean.

Mulberry has a long way to go before its the consumer darling it once was, but Coca’s a more than capable accessories designer, which is what matters most to us.

from PurseBlog http://ift.tt/2lpeHyA
via IFTTT